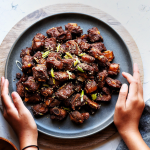 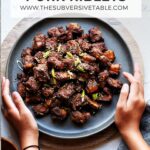 Saucy, sticky, glazy. A little Korean, a little Chinese. These Asian Pork Riblets were one of my favorites from my Korean grandmother’s kitchen. Now they can be yours, too.

My Korean Grandmother or Halmoni grew up in North Korea, near the Chinese border. Her father was a businessman who traded goods with China. He spoke Mandarin, hired Mandarin-speaking servants, and liked to eat Chinese food.

Halmoni’s palate, like her father’s, was a mix of two worlds. Eventually, she became a grandmother who loved to eat and cook all kinds of fusion food.

Asian Pork Riblets was one of the dishes that Halmoni cooked on a semi-regular basis. Not exactly Korean and not exactly Chinese. Maybe a little bit of both? With soy sauce, ginger, brown sugar, and vinegar — these Asian riblets were always a saucy, sticky, glazy favorite of mine!

Today, they are a favorite with my own kids. We eat Asian Pork Riblets with rice and sauteed leafy green veg. And also, kimchi. There are rarely leftovers!

Riblets are commonly found in Asian cooking. They are smaller than regular ribs, with a little bit of bone and meat attached to each bite.

Riblets are actually regular-sized pork ribs cut across the bone into smaller chunks. Think of them as mini-ribs.

The smaller size makes them perfect for weeknight cooking. They cook quickly and taste good with the Asian flavor base of soy sauce and ginger.

Riblets are also small and nubby, perfect for picking up with chopsticks and eating with rice. They are fun to eat and very child friendly. My kids love them!

How to make Asian Pork Riblets:

1. Cut pork riblets into 2-inch sections, between bone segments. The riblets should be roughly the same size.

2. Heat 1 Tbsp neutral oil in a large stock pot. When the oil shimmers, add ginger and stir until golden and crispy looking.

4. Remove lid and raise heat to medium. There will be a lot of liquid in the pot. Simmer until most of the liquid has evaporated, leaving a sticky, saucy glaze.

5. Turn off the heat and sprinkle the remaining 1 tsp rice vinegar. Serve immediately and enjoy.

For an easy dinner, serve with rice and kimchi. Or, add steamed vegetables or sauteed greens. 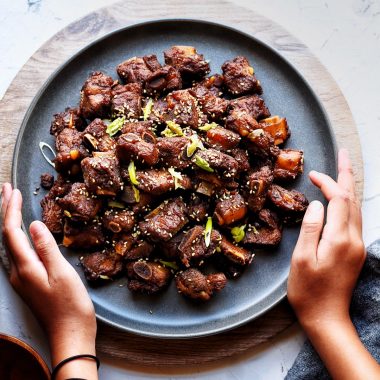