As much as I love a traditional seafood boil, I’ll admit — there are times when the flavor seems too meek and mild for my taste. Sometimes, I crave different. And spicy. And garlicky and pungent and flavorful!

That’s how a random google search introduced me to the amazing world of Viet-Cajun cuisine.

Did you know that Viet-Cajun food originates in the state of Texas? And that Texas has a sizable Vietnamese population? The largest in the US outside of California, in fact?

Did you also know that this group of new Americans arrived after the Immigration Act of 1965? And that they were harassed and intimidated for years? By the local KKK who destroyed their crab boats and burned crosses in their front yards?

Yup, neither did I. I had no idea that Viet Americans in Texas, enduring decades of hardship and racism, created a uniquely delicious expression of American food at all!

If you think about it, the Viet-Cajun flavor combo makes total sense. The American South and Vietnam are both seafood-loving, port-based locales. Mixing flavors from these two regions results in a harmonious, unbelievably delicious alliance. Cajun spices, Old Bay, lemongrass, fish sauce, scallions, ginger, and lots of garlic — oh yes, you know it’s going to be tasty!

Viet-Cajun food also contradicts the revisionist history I learned as a child. In my school textbooks, I read about America being a “Melting Pot.” Immigrants arrived and “melted” into an American cultural homogeneity. Back then, I didn’t question this one-sided narrative advanced by those in power. But now I see it for what it is: a dangerous and dehumanizing patriotism. Citizenship shouldn’t require cultural erasure. Or abandoning personal identity and ethnic heritage.

We only need to look to the crazy-delicious flavors of Viet-Cajun food to understand: our differences make life better. And produces some pretty tasty food! Embrace the richness and diversity of the American experience by throwing a Viet-Cajun Seafood Boil!

A note: Viet-Cajun boils typically include fresh crawfish. We don’t have access to fresh crawfish here in Toronto so I adjusted Southern Living’s recipe accordingly. Enjoy!

How to Assemble a Seafood Boil:

I love seafood boils. They are extravagant meals that don’t require much cooking at all. Basically, you’re assembling layers in a pot. My advice: make sure to use a timer! Also, use the freshest ingredients you can find.

Make spicy garlic butter sauce: melt together ingredients and simmer for 5 minutes. Cover and set aside. (You don’t need the shallot, as pictured.)

Fill a large stockpot with 6 cups of water. Add garlic, lemongrass, ginger, fish sauce, Old Bay, and Cajun seasoning. Bring to a boil and simmer until flavors combine, about 5 minutes.

Add shrimp, clams, and corn. Boil until clams open and shrimp turn pink, another 4-5 minutes. Use a mesh strainer and transfer to a tray. Leave behind the broth and aromatics (garlic, lemongrass, ginger).

Add lobsters and boil until bright red and cooked through. Transfer lobsters to tray, scatter with scallions, and enjoy! 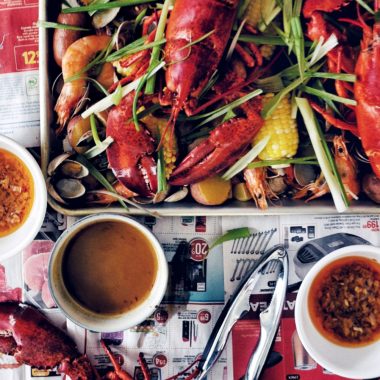 *I use N’wlins Cajun Seasoning, which contains salt.  Check the label of your cajun seasoning.  If it doesn’t include salt, taste the broth and adjust.  You can add more salt or fish sauce if necessary.
Keyword Seafood Boil, Viet-Cajun
Tried this recipe?Let us know how it was!