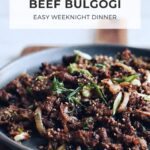 Everybody loves Korean Beef Bulgogi. A simple marinade and thin-cut beef are all you need for a super-fast, smoky-charred plate of seriously delicious Korean BBQ Beef!

There’s a reason why everyone loves Korean Beef Bulgogi.  Fast, tasty, and on the table in 30 minutes.  You’ll be wondering why you never made it before!

I grew up loving and eating this iconic dish.  Korean Beef Bulgogi was a staple at barbecues and for weeknight dinner. Now, you can make it a part of your table, too!

What is Korean Beef Bulgogi or KBBQ Beef?

Literally translated as “fire meat,” the flavor is dangerously addictive with a salty-sweet, garlicky flavor that’s also got smoky char from the barbecue.

Served with rice, lettuce wraps, and various side dishes — beef bulgogi is a Korean BBQ classic. You can’t get enough of that delicious, juicy meat marinated with garlic and onions!

What pan should I use to cook Bulgogi at home?

There are several ways to cook Korean Bulgogi at home. Choose the option that’s easiest and most accessible for you:

Note: Korean Beef Bulgogi is not a dry meat dish. As you cook, the meat will release its juices. Save those juices and scrape into your serving platter. There’s nothing so good as bulgogi juice spooned on top of rice!

Other easy Korean recipes you may enjoy: 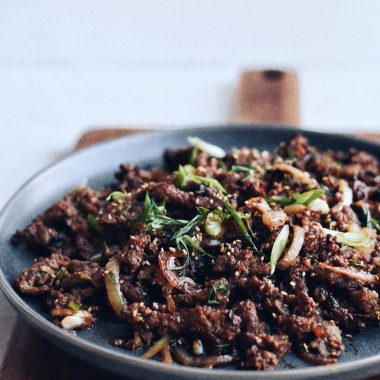 In the food processor:

In the prep bowl: