Light, soft, creamy — like biting into a billowy Korean Potato Salad cloud! Make fluffy Gamja Salad for your next BBQ!

Served as one of several banchan (side dishes), it’s the one that I reach for again and again. So light and fluffy! So deliciously addictive!

Out of all the potato salads in the world, it’s definitely my favorite.

What is Korean Potato Salad? How is it different?

Gamja Salad differs from the standard North American potato salad because of the texture + flavor.

Korean Potato Salad is soft and fluffy. This is not a heavy, dense potato salad. It’s light and airy and creamy — like biting into a billowy potato salad cloud!

Gamja Salad also has that distinctive Korean flavor. A little bit sweet and tangy. With an eggy richness that’s so very luscious and satisfying!

There are so many variations and ways to enjoy Korean Gamja Salad!

At minimum, I recommend adding cucumbers. But I often add carrots to make it look extra colorful and festive!

Make it a complete meal with: 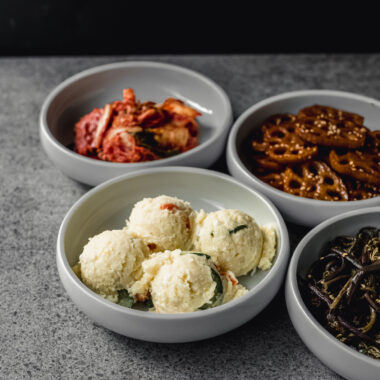