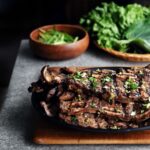 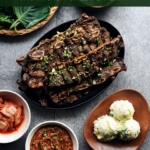 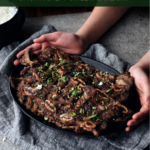 The first time I made LA Galbi without my Korean grandma, I was a 20-something living in NYC. I needed a dish to bring to a potluck. So I called up Halmoni.

Her instructions: Puree some onion and Korean pear. Add soy sauce but not too much. Then add sugar until it’s sweet enough. You’ll need lots of garlic and green onion. And a drizzle of sesame oil, at the end.

I added a can of Coca Cola for good measure, remembering the advice of Korean American friends who swore by this “secret” ingredient.

The result? Everyone at the potluck went crazy. And I’ve been making Korean BBQ Short Ribs this way, ever since.

What is LA Galbi?

LA Galbi is a particular kind of Galbi or Korean BBQ Beef Short Ribs. Thinly sliced short ribs are cut across the grain and marinated with pureed onion and pear, soy sauce, sugar, and plenty of garlic. The rich flavor of beef is complemented by the salty-sweet-garlicky marinade. Barbecued over a hot grill to get that charred, smoky flavor, it’s classic party food. A great way to celebrate with others!

The name — LA Galbi — comes from the Korean diaspora living in Los Angeles during the 1980’s and 1990’s. Galbi is traditionally made from butterflied short ribs that fold and wrap around a long bone. But LA Koreans didn’t have access to this cut of beef. Instead, they used what was available. A different, non-traditional cut of beef short rib that was thinly sliced and showed the bone “eyes.” In the process, they created a uniquely Korean American innovation!

Nowadays, most people associate Galbi with this cut of beef. But before the Los Angeles Korean Americans, no one made Galbi this way!

1. In a food processor, puree onion, Korean pear, garlic, ginger. (Or, grate on a box grater.)

4. Add Coca-Cola directly on top of the ribs. Mix again. The ribs should be completely submerged! Cover and marinate overnight.

More sides (traditional and non-traditional) to serve with LA Galbi: 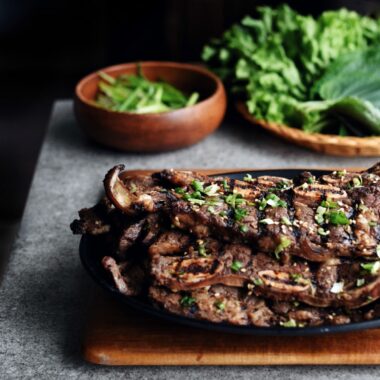 *If you choose not to add soda, add 1 Tbsp more sugar.   **I’ve used all kinds of soda and while they taste similar, I prefer Coca Cola for that deep, caramel-y taste and color.  Full disclosure:  I lived in Atlanta during my teen years so I have a not-so-impartial bias for Coca Cola! ***The BROIL method for cooking Galbi comes from many years of cooking Galbi in small NYC apartments with no grill access.  Turn on the exhaust fan, if you have it, and open the windows if there’s too much smoke!    ****This recipe doubles very easily.  You won’t need 2 cans of soda though.  Simply double everything else except the soda.  Then cover with enough Coke so that all the ribs are submerged in liquid.  That’s usually 1 (300ml/10oz) can.
Keyword Grilled Beef Short Ribs, LA Galbi
Tried this recipe?Let us know how it was!

More Korean Banchan (side dishes) to serve alongside LA Galbi: