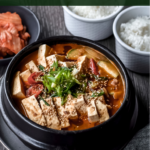 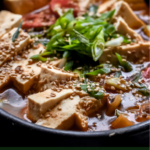 Filled to the brim with tofu, pork and vegetables — Doenjang Jjigae or Soybean Paste Stew — is Korean comfort food to the core.

From the beginning of the pandemic until now, there’s one food item that I’ve cooked more than any other: Doenjang Jjigae.

It’s not surprising, given how frequently I ate this stew during my Korean American childhood.

I ate Doenjang Jjigae at least once every other week, in all seasons of the year, rain or shine, late at night and early in the morning.

Even now, as an adult, I can’t help but love this dish. I’ve cooked it so many times, it runs through my veins. I don’t have to think, I don’t even measure. I simply pour and stir, taste and adjust. And just like that, dinner has magically conjured itself onto the supper table.

What is Doenjang Jjigae?

Doenjang Jjigae is Korean fermented soybean paste stew. A classic, savory stew that’s flavored with Doenjang and filled with tofu, protein, and vegetables — this is Korean comfort food at its best.

Koreans regularly eat and cook Doenjang Jjigae. It’s one of those dishes that’s always on the table. Everyone makes their own version, usually without a recipe. Sometimes fancy, sometimes basic. Sometimes spicy, other times not. It really depends on your mood and what’s in your fridge.

What is Doenjang? Where can I find it?

Doenjang is Korean fermented soybean paste. Thick and pasty, a big scoop adds so much flavor! The exact taste is hard to describe — salty, savory, pungent, and full of umami. Think of it like a souped-up Miso paste, with maximum flavor and addictive intensity.

At Korean supermarkets, Doenjang can be found in the same aisle as Gochujang. They are sold in plastic tubs or glass jars.

For Doenjang Jjigae, I prefer Baek Il Doenjang. It’s got a stronger Doenjang flavor. But if you’re a newbie to this dish, I recommend Mat Doenjang. Milder flavor but still good.

But if you can get your hands on homemade soybean paste, that’s what tastes best. It’s much chunkier, thicker, and darker than store-bought. Also, the flavor is amazing.

What else can I make with Doenjang?

Now that you have a jar of Doenjang in your fridge, what else can you make?

Some other food items that highlight Doenjang:

As a Korean American, my relationship with Doenjang Jjigae was not always positive. Back then, Korean food was considered strange and foreign. How do you explain fermented Soybean Paste Stew to friends who consider ham sandwiches, chicken noodle soup, and mac ‘n cheese “normal” food items? You really can’t.

So, for awhile, I distanced myself from Korean food. Better to eat Korean food in private than to keep explaining to people who didn’t understand.

Then we moved to an apartment building as the only Koreans in the entire complex. Our upstairs neighbor immediately complained about the noxious food smells emanating from our kitchen. They demanded that we stop cooking Korean food. The food we cooked made their eyes water and throats gag; living above us was unbearable.

That year, we endured the shame of being told our food smelled like rotten garbage and sewage waste. We watched as building inspectors marched into our home to determine whether or not the claims were true. (They were not.). And lived with the knowledge that everyone else in the building knew what was happening. It was embarrassing and stressful, to say the least.

The neighbors kept complaining until one day, they knocked on our door around dinnertime. The fumes were especially strong, they claimed. Whatever we were cooking — at that moment — was the culprit. But we weren’t cooking anything at all. We told them we hadn’t cooked all day, in fact. They didn’t believe us. So we showed them our clean and orderly kitchen; everything was wiped down and pristine, with no smells at all. Sheepishly, they went away. And the complaints stopped soon thereafter.

That’s when we realized, it didn’t matter what we cooked. Their problem was not our food but us — foreigners and outsiders who did not belong in their apartment complex.

Living there made me understand, not everyone will accept me or my food. There will be people who ridicule, mock, and criticize me. They will complain that my food smells bad and make bigoted remarks about our presence in the “changing” neighborhood.

In the face of such hatred and discrimination, I can give in to people’s view of what I should eat and who I should become. Or, I can resist. I can challenge racist ideas and instead say: my presence matters. And yes, my food matters, too.

Cooking a pot of Doenjang Jjigae may not seem like a big deal. But for me, it’s a radical, defiant act.

Every time I cook this soup, I embrace my rich and long-standing cultural history. I add a big scoop of soybean paste and remember, I come from a people who survived war, colonization, and violent attempts to destroy us. As I cut thick slices of tofu, I acknowledge — hatred will not overcome me or my people. I sit down to eat with with others, and in doing so, affirm that we all belong here; there is space enough for everyone.

Because of all these reasons and more, I will never give up cooking or eating Doenjang Jjigae.

Is Doenjang the same as Miso?

Doenjang and Miso are similar but not the same. They are both fermented soybean pastes. But Miso is fermented with Koji, a rice based starter — giving it a slightly sweeter, milder flavor. Doenjang, on the other hand, is usually fermented with just salt — giving it greater depth and sharpness.

I like to think of Doenjang as a souped-up miso paste. It’s more complex, deeply flavored, earthy, and pungent. Doenjang can also be quite chunky with lots of texture. Sometimes you’ll see pieces of partially crushed soybeans in the thick paste.

How do I store Doenjang [Korean Soybean Paste]?

Store Doenjang in the coldest part of your fridge, tightly sealed.

FYI: Doenjang is a fermented food product; it keeps aging and transforming over time. The taste and color will continue to deepen. Technically, it can last forever. But over time, it will look and taste very differently! 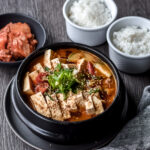