Fresh. Crunchy. Savory and satisfying. On the table, 30 minutes or less! Spicy Tuna Gimbap — the humble pantry meal that feels like a feast.

But pantry-friendly Spicy Tuna Gimbap is a simple and easy weeknight meal. No cooking. Minimal prep. So easy and so good!

What is Spicy Tuna Gimbap?

Spicy Tuna Gimbap is a variation of a popular Korean snack that’s made with rice and various fillings rolled up in a large sheet of seaweed or nori.

Gimbap/Kimbap literally translates as “Seaweed Rice.” Most people are familiar with the traditional kind sold in Korean markets — with a variety of colorful vegetables and proteins.

By contrast, Spicy Tuna Gimbap is MUCH easier to make at home. The main ingredient is canned tuna. And there’s no cooking required, except for the rice!

Make simple and easy Spicy Tuna Gimbap and you’ll soon be making it on the regular, too!

Other easy recipes to love: 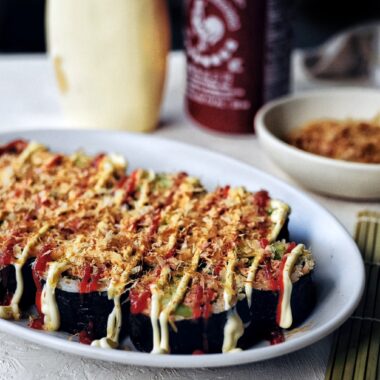