Korean Cucumber Salad is the kind of exciting, super-simple recipe that makes every meal better!

One crispy, crunchy bite will get you hooked. Garlicky. Spicy. Addictively tasty. And SO EASY to make at home! On the table in 15 minutes.

Fresh, crunchy cucumbers. Fiery, vibrant dressing. You MUST make this classic Korean dish for your next BBQ, party, or weeknight dinner!

Korean Cucumber Salad (or Oi Muchim) is a fresh cucumber salad that’s served at the Korean table. Often served as banchan or one of many side dishes, the quick preparation makes it an easy favorite.

The tantalizing, heady flavors are especially exciting and delicious. No boring cucumber salads here! Garlicky, spicy, salty-sweet, tangy — there is no better way to eat cucumbers, in my opinion.

Oi Muchim is part of the Korean family of “mixed” salads — meaning that the dressing and vegetables are mixed by hand. Similar to Siguemchi (Spinach) Muchim or Kongnamul (Beansprout) Muchim, the hand mixing is an essential way to infuse the flavors together.

Spicy, juicy, crispy, and crunchy — make Cucumber Muchim your go-to easy cucumber salad that perks up everything else on the table!

A simple dump-and-mix recipe. Pour everything into a bowl and mix.

There are 2 methods, depending on the type of cucumbers.

For Kirby or Pickling Cucumbers:

What to serve with Korean Cucumber Salad:

Other side dishes that taste great with Spicy Korean Cucumber Salad:

Or, serve alongside a bubbling jjigae (soup/stew): 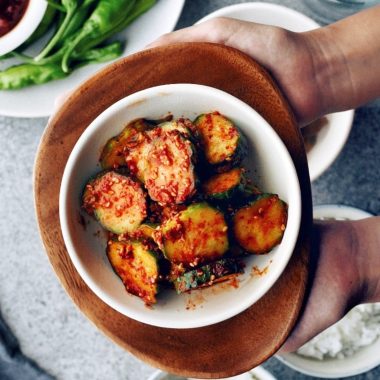 For Mini, Persian, or Curly Cucumbers: